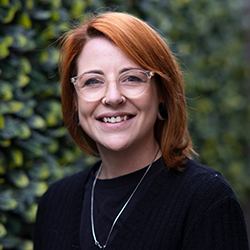 Leah says they “fell into” work in disability ten years ago, but really it was a case of falling in love with the sector. After studying mental health, Leah became a support worker at major Melbourne support providers and was most recently a regional manager at Mambourin.

They've done it all, from running camps for young people to training as an internal auditor for quality and safeguards reporting. Leah says the time has passed in the blink of an eye, but it’s the friendships made that they treasure most. They're a huge fan of The Big Bang Theory so it comes as no surprise their two cats are called Penny and Sheldon.