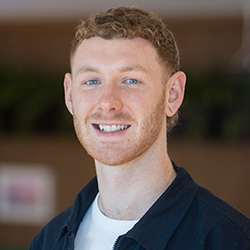 A six-month backpacking adventure turned into a permanent move to the other side of the world for Londoner Andy.

With a background in sales (ask him about digital showers, they’re really cool, we promise!) Andy decided to put down roots Down-Under after meeting his partner in Melbourne. After working in insurance punctuated by the obligatory fruit-picking stint, Andy is excited to have joined a not-for-profit organisation. His role in the Ops team includes onboarding, pay queries and certification compliance.

At home, Andy has a growing collection of colourful trainers, which now number more than 45 pairs!